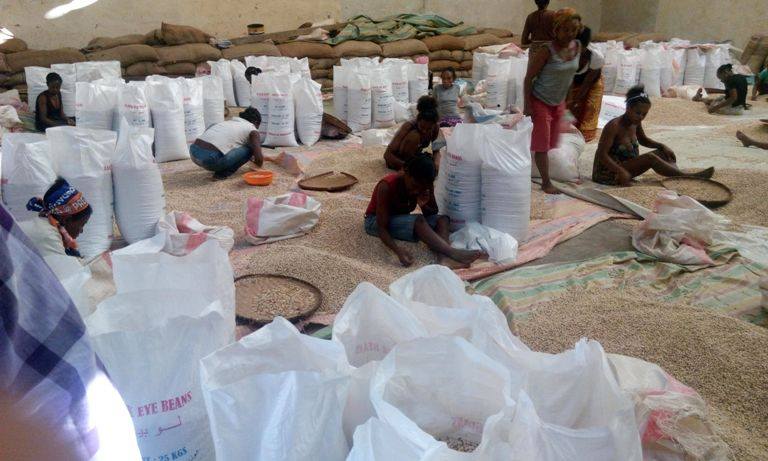 [:en]In Madagascar, the production of black eye peas is primarily intended for export. With the increasing interest of exporters and farmers in this product, in 2016, the country ranked third among the world’s black eye peas exporters with nearly 15,000 MT. Madagascar exports these products around the world. The destination of the black eye peas of Madagascar consists of two distinct markets, on the one hand the Asian market with India and Pakistan, and on the other side the western market which includes Europe and the United States. From 2011 to 2016, Malagasy production fell from 22,000 to 14,905 MT. But the country remains among the most important exporters of black eyes in the world. By 2016, 33% of Madagascar’s production was exported to the Asian market while 40% was destined for the Western market.

The price of black eye peas has not stopped rising, going from 1,800 to 2,500 Ariary the kg for the first quality and from 1,400 to 2,000 Ariary the kg for the second quality between 2011 and 2016. For professionals, offering a secure trading price of the black eye peas is necessary to avoid speculation that could endanger this product. According to studies on this sector, the two markets have different needs in terms of quality. The Asian market does not set precise quality criteria, as long as the product meets export standards. For the Western market, on the other hand, only quality products (grade 1) are retained.

The black eyes bean is one of the varieties of peas that Malagasy farmers cultivate alongside the red cowpeas, brown cowpeas, green mung peas… This crop is mainly found in the northwestern Madagascar, on the lands of the Sofia Region (Port-Bergé and Mampikony), the southeast of the Boeny Region and the far north of Betsiboka.

In recent years, the sector had some difficulties. Approximately 98% of black eyes are still manually farmed, only a minority of farmers has tractors or agricultural equipment. Some stages of cultivation, however, require its realization by means of animal traction. Insecurity is the biggest obstacle for these producers. The cultivated areas depend on the financial capital available during the starting of the season. Indeed, small producers develop other complementary economic activities such as fishing or handicraft to finance their crops, and the areas cultivated obviously vary according to the money raised. All this challenges the professionalism of the sector and the production of black eye peas of Madagascar. In addition, the land tenure problem remains a discriminatory criterion between these two groups of producers because of the high investment costs necessary to access to the land. The cultivated areas of small manual producers are therefore limited to 3 ha whereas those of large mechanized producers can reach up to 50 ha.